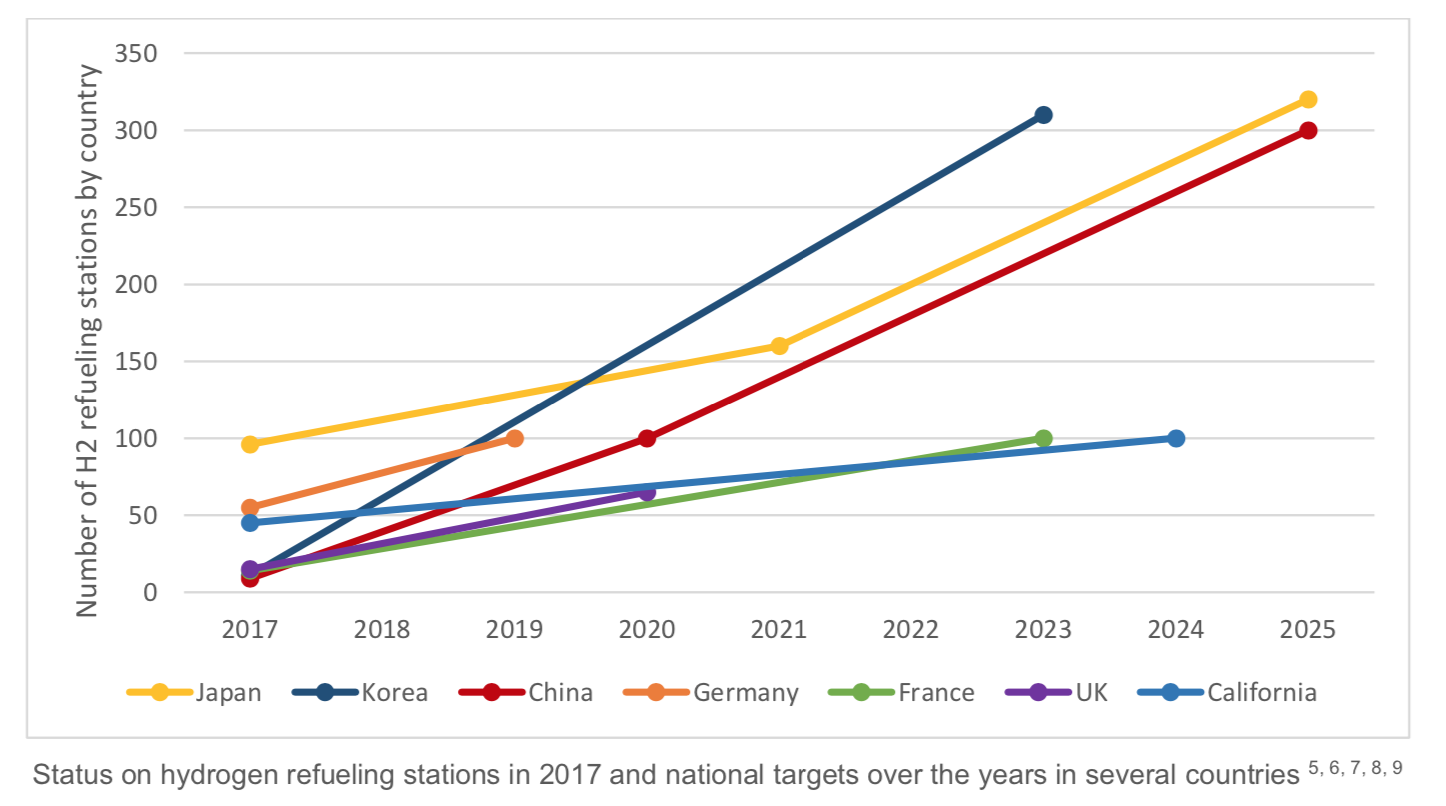 Hydrogen refueling station: a market ready to ramp up!

Submitted by GrandChef on 17/07/2018
Hydrogen (H2) refueling stations are the enabling infrastructure for fuel cell electric vehicles. Until recently, only few stations were built. But last H2FC Fair in Hannover showed that the technology is now mature. In parallel, many countries have planned massive deployment of hydrogen refueling stations in the short term. And recent announcements from industrial stakeholders investing in fuel cell vehicles indicate that these stations have potential to generate business in the coming years.

This year, the Hydrogen Fuel Cells Batteries Group Exhibit at Hannover Messe celebrated the rise of hydrogen mobility. While PLASTICOMNIUM and FAURECIA were promoting their latest R&D achievements in components development for H2 mobility, the most visible trend was the maturity of hydrogen refueling station technologies. If there was one message to take away from H2FC Fair, it’s: refueling stations are ready for immediate deployment!

Apart from the well-known AIR LIQUIDE, the 3 main contenders in that field are NEL HYDROGEN, ITM POWER and MCPHY ENERGY, all of them having the largest booths. Interesting to see that all these 3 companies were historically focused on electrolysis. They now offer turnkey solutions for H2 refueling stations with onsite production of hydrogen. The decarbonization of the production of hydrogen is indeed at the heart of a shift to H2 mobility.

NEL has taken the lead by achieving UL certification, a process that took 2 years to complete but will now greatly facilitate regulatory procedure for each station. But its competitors are also ready to scale up their business too and the massive deployment opportunities in European countries and Asia should offer room for several contenders.

HASKEL and SERA are two companies coming from the gas compression business. They are now offering their integrated solution for FCEV refueling as well. The French startup ATAWEY also offers refueling solutions for FCEV fleet, not only for 4-wheel vehicles but also for hydrogen bikes, manufactured by their partner PRAGMA INDUSTRY.

Market perspectives are opening up for all these companies. Japan is the historical leader in its “hydrogen society” transformation and is aiming at 160 stations installed by 20212. Germany and California are quickly expanding their refueling infrastructure for the past few years and need to double the number of stations to reach their short-term goal of 100 stations. But new markets are showing great promise too: China, with its national “New Energy Vehicle Program” is aiming at 100 stations by 2020 and Korea at 310 stations by 2023. The UK and France, even though lagging behind Germany, are also emerging markets with recent announcements for the hydrogen economy.

For those who worry about the chicken and egg dilemma between the H2 refueling infrastructure and the FCEV fleet development, recent announcements should lower skepticism.

The French company HYPE has already purchased 100 hydrogen powered taxis. China is deploying large fleets with hundreds of hydrogen-buses being delivered in Wuhan11 and the largest national retailer JD.com is now testing dozens of hydrogen powered delivery trucks. Several large Swiss corporations announced an association aiming at operating 1,700 heavy duty vehicles and a large network of refueling stations. Their goal is to quickly build a profitable national hydrogen refueling infrastructure country-wide. Other announcements in the US and Japan also indicate that fuel cell vehicles will ramp up in the next few years. While UPS and FEDEX are also testing hydrogen powered delivery trucks, ANHEUSER-BUSCH ordered 800 fuel cell heavy-duty trucks and TOYOTA is planning to produce more than 30,000 FCEV a year after 2020.

We can all agree that the development of the hydrogen refueling infrastructure is key to the emergence of hydrogen mobility. Now that several countries have set their objectives, the question is: where will be the early profitable business cases in this field?

Interested in knowing which companies are involved in hydrogen refueling stations? Check out our H2 energy company database, which includes many Hydrogen Refueling Stations integrators and EPC and other companies involved in key components development.