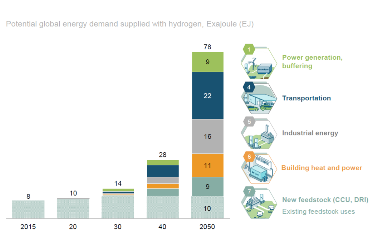 Mass production of hydrogen from electrolysis

Hydrogen allows to store massive amounts of energy and to release it when needed for industrial use, electricity generation, and more and more for transport applications. But one of the main bottlenecks for a widespread use of hydrogen as major energy carrier in the energy transition is its production from renewable sources. Electrolysis is the most popular option today for production of renewable hydrogen. But its massive adoption faces 3 main challenges: finding cheap renewable electricity, optimizing capacity utilization rate and massive deployment of solar and wind power.

Let’s take a look at the hydrogen demand scenario from the “Hydrogen Scaling Up” report1: the world currently produces 8 EJ (or 56 million tons) of hydrogen and would need 78 EJ by 2050 (or 550 million tons). A ten folds increase in 35 years.

Today, about 95% of the production of hydrogen comes from fossil fuels: steam reforming, partial oxidation, or autothermal reforming are the traditional technologies to convert gas, oil or coal into hydrogen. If we want hydrogen to be a major energy vector in the energy transition, one of the main challenges is to produce much more hydrogen than today and do so from renewable resources.

The 2 main ways to produce hydrogen from renewables are:

In this article, we will focus on hydrogen production from electrolysis. It is a technology available for decades, but it still faces 3 main challenges in order to become a major source of hydrogen.

First, two main factors must be considered for a viable business case in hydrogen production from electrolysis: electricity prices and environmental constraints. In large electrolysis plants (we’re talking power of 100 MW or more), most of the hydrogen production cost comes from electricity consumption. Some industry actors estimate that the price of electricity should be lower than 30 €/MWh to make a competitive business case. It means LCOE3 of renewables still needs to go down in Europe (lowest LCOE for wind and solar in Germany in 2018 was around 40 €/MWh4). To balance the cost of electricity, governments can help penetration of electrolysis by implementing specific environmental regulations. A carbon tax would increase the price of hydrogen produced from reforming while quotas of hydrogen from renewable sources could also be enforced. A promising project based on these conditions is being developed in the Netherlands5. It aims at producing hydrogen from electrolysis at 2.3 €/kg, which is competitive with hydrogen from fossil fuel.

Second point: if electricity only comes from renewables, the capacity utilization rate6 of the electrolyzer will be limited by the capacity factors of photovoltaic plants (10% to 25%), windfarms (20% to 35%) or hydroelectric power plants (25% to 45%)7,8. With a good balance between these sources, higher rates can be achieved but it will not reach an optimal load for maximizing the return on investment of electrolyzer installations.

Third difficulty: the macroscopic needs. Today, a NEL alkaline electrolyzer roughly consume 4 kWh/Nm³ which translates into 45 kWh per kg of hydrogen9 (infrastructure losses should also be taken into account for a proper calculation). Let’s think about a target of 20% of the current world consumption of hydrogen produced by renewable electrolysis by 2030 (11 million tons). It means we need 500 TWh of electricity. It accounts for 8% of the global renewable electricity produced in 2017 (6 200 TWh, mostly hydropower) or 29% of wind and solar power generated that year (1 750 TWh)10. Of course, renewable electricity production will be much higher by then, but this kind of target represents a huge amount of wind and solar power plants dedicated to hydrogen production.

Newer technologies like Proton Exchange Membrane (PEM) or Solid Oxide Electrolysis Cells (SOEC) aim at improving the efficiency of the electrolysis process. In the long run, it may reduce the production cost of hydrogen, but it doesn’t compare with economies of scale.

In the end, the success of large scale water electrolysis relies on a complex mix of cheap and abundant renewable electricity, favorable political rules, and a diversified demand for hydrogen in a specific place.

5 Noordelijke Innovation Board, The Green Hydrogen Economy  in the Northern Netherlands, 2017

6 The number of hours an installation is running per year